It’s Not About Me. It’s About Our Company Values. 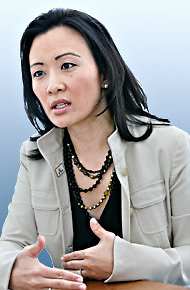 Cathy Choi is president of Bulbrite, a lighting maker and supply company in Moonachie, N.J. After accepting her father’s offer to join it, she says, she “made a concerted effort to make the company the leader, not me or my dad.”

Every Sunday, Adam Bryant talks with top executives about the challenges of leading and managing. In his new book, (Times Books), he analyzes the broader lessons that emerge from his interviews with more than 70 leaders.