TALE ME YOUR IDEA NOT ABOUT MIND : LEADER SAYS:

Tell Me Your Idea (and Don’t Mind the Silly Putty)

This interview with Laurel J. Richie, president of the W.N.B.A., was conducted and edited by Adam Bryant. 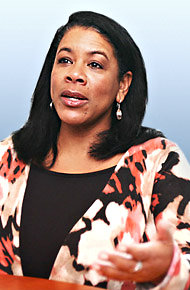 Laurel J. Richie, president of the W.N.B.A., says she’s learned to encourage employees to express their own points of view. At meetings, she says, she has even played with Silly Putty “to give people time to think and create and develop.”

Q. What do you consider some of the most important leadership lessons you’ve learned?
A. There were a couple of pivotal experiences for me. I had just been made a vice president at Ogilvy & Mather and I was running an account that was incredibly successful. I went on vacation thinking I deserved a break. I came back and my entire team had gone to H.R. and said: “We can’t do it anymore. It’s a great account, but we don’t like working for Laurel because working for her it feels like it’s all about her and not about us. So we want to work on another piece of business.”
Q. Welcome back from vacation.
A. Exactly. I remember feeling shocked, and defensive at first. But then I really stepped back and listened to what they were saying. I really thought I was a terrific leader because if you looked at all the metrics, we were successful. But I learned very profoundly in that moment that if there is not shared ownership of the work, both our successes and our failures, people aren’t going to have a satisfying experience.
Q. So what did you do?
A. I redefined my job as a leader to create an environment where good things happen, and where people feel good about their role on the team, and they feel acknowledged, they feel empowered, and they feel visible. I thought that in many ways I was protecting them from bad things, and they were saying, in effect: “No, actually we want to see those bad things. We won’t grow unless we experience them.”I went back to the team, and we all went in a room and I said: “I got the feedback. Thank you for doing that. I had no idea. Can I have another chance and can we work together on this?” And we all came together. One of the greatest things is that at the end of the year, somebody on the team came to me and said, “I’d walk through fire for you.”
Q. What specific steps did you take after that with your staff?
A. I asked them what they wanted to be involved in. I asked them to give me examples in the past of when they had felt marginalized. I asked them to talk to me in the moment when I was heading down that path again.
I also bought some Silly Putty. I remember I would sit in meetings and just open up that pink little egg and literally just stretch the Silly Putty to give people time to think and create and develop, even though I was sitting there thinking: “I know how to do this.  I know exactly what we should be doing.” Instead, I let them present a point of view or share work that may have been not exactly the way I would have done it, but I learned there are many different ways to get to the end point.
Q. You said there was a second big lesson.
A. The big account I worked on was Kimberly-Clark. I worked on that for years, and there were very few African-American women at Ogilvy or at the Kimberly-Clark headquarters. So I was a fish out of water.
The president of the Kimberly Clark division I was working with took a liking to me, and he did a terrific job of striking a balance between acknowledging the differences but celebrating them. He didn’t want me to conform. I learned from that experience about the importance of building teams where you have true diversity of thought, of style, of background, of experience. That could have been a pretty daunting experience as a young professional, and he just made it O.K. to really show up exactly as I am and who I am.
Q. What about earlier in life?
A. I grew up in Shaker Heights, Ohio. It became apparent very quickly that there were no other black people anywhere around us. My parents are both incredible trailblazers, so I think I get this gene of being a little bit fearless and sort of embracing the notion of being the first and the only. And I’m not doing it for that reason, but I realize that I’m actually comfortable doing it.
Q. What leadership lesson have you learned recently?
A. I keep learning time and time again about how important it is as a leader to have a clear vision and communicate it often. I’m usually very clear in my head about where I think we should be going, and I’m always learning that you cannot over communicate that. I get a little bored with it because it’s familiar to me, but I realize it almost has to become a mantra so that everyone on the team knows where you’re headed.
A. You tell people, “here’s where we’re headed and these are our priorities,” and then you just sense how often people are wandering. I always say that part of the job is keeping all the bunnies in the box. You start with all the bunnies in the box and then somebody gets a great idea to go do something else and you go help them all come back and get in line and then a bunny over here pops out. So the more the bunnies are getting out of the box, the more I realize I just haven’t done a good enough job communicating what our priorities are and what our focus should be.

Q. What else is distinctive about your approach to management?

A. I tell people that I know I can be a bit controlling, so if people are feeling like they don’t have room and space, they should tell me that. I tell people I really like to be challenged. I am rarely without a point of view, and so I always tell people to come back three times if they really believe in their point of view. The first time they say something, I might say, “It’s a really good point but here’s why we’re doing this.” If they really feel strongly, they’ll come back again and I’ll say, “I really hear you so I want you to know I’m genuinely listening.” And then if they still feel that strongly, they can come back a third time and say, “Remember when you said come back the third time?  This is the third time.”
And I tell people, “don’t let the conviction of my thinking ever get in the way of feeling like you can challenge me.” I have learned that I speak very forcefully and very directly, and for a lot of people, that says to them: O.K., that’s done. That’s off the table. And I really don’t mean that it’s off the table. I get it from my dad. I speak directly, and it sounds like it has been decreed, as opposed to that’s my thinking today and that’s my point of view.
Q. That’s a good rule. How did you develop that?
A. I think I developed it because I was hearing too many people saying, “Yeah, we really felt strongly about it but you made it pretty clear that that wasn’t an option.”  So that made me realize there’s something in how I’m acting that people don’t feel like they can challenge me even though I’m saying I want to be challenged.
I want people coming in every day thinking this is a place where they can bring their very best, and I believe that if they feel that way, they will actually do it. I just don’t believe in terrorizing, intimidating, testing, catching people off guard. I don’t play games. Life’s too short, and we’ve got too much to do. I want people focusing on the work, not on how to navigate politics. I never want people sitting in their offices or their cubes thinking, “What does she really mean or what does she really want?  What is she really asking?”  That’s just wasted time to me. That’s why to me, it’s my job to create an environment where they can bring their best selves, and good things will happen as a result.
The other thing I’ve learned the hard way is that every organization has politics. I used to come in as a purist, saying “I don’t do politics,” and I’ve realized that that’s actually quite naïve. You have to acknowledge that there will always be politics. There’s a culture in every organization of how things get done and how people communicate, and you have to truly understand that in order to be effective. You have to be aware of it.